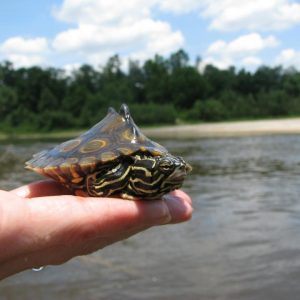 Wildlife generally flee from approaching humans, choosing to conduct their business where they are undisturbed by our presence. Ole Miss researchers have demonstrated that human disturbance of basking behavior in the ringed sawback turtle (Graptemys oculifera) may at times be harmful to the recovery of this federally threatened species. The study published online today in the scientific journal ‘Aquatic Conservation: Marine and Freshwater Ecosystems’, is coauthored by Jessica Heppard, who was a Master of Science graduate student in the Department of Biology, and Associate Professor Richard Buchholz. According to Dr. Buchholz “Turtles bask in the sun to elevate their body temperature so that they can move quickly, digest their food and fight off diseases. They don’t ‘burn calories’ in their cells to stay warm, the way that we do.” Consequently turtles that are disturbed from basking often, especially in the late spring when the air and water is still cool, might take longer to grow to maturity and may lay smaller or fewer eggs as adults, he suggests. The ringed sawback, was listed as Threatened under the US Endangered Species Act in 1986, and is considered Endangered by the State of Mississippi. Their study focused on this turtle’s behavior in the Pearl River Wildlife Management Area, where the factors that led to the decline of this species, including river channelization, removal of tree snags, water pollution and collection for the pet trade, are prohibited. The natural beauty of this unmodified section of the Pearl River, north of Ross Barnett Reservoir near Jackson, Mississippi, however, makes it especially attractive to boaters. The researchers found that on holidays as many as 84 boats per hour can pass turtle basking sites, often causing compounding boat wakes that forced turtles back into the water. By combining environmental measurements, behavioral observations of undisturbed and disturbed turtles, and a thermal model based on shell temperatures of captive sawbacks habituated to humans at the nearby Mississippi Museum of Natural Science, the investigators used a computer simulation to demonstrate that even minimal disturbance could cause a nearly 3% reduction in daily metabolism of large female sawbacks in the month of May when the air and water remain cool. “The negative impact of disturbance of basking is subtle, but when combined with the destruction of turtle nests by human recreation on sandbars, it may explain why this endangered population has not recovered” says professor Buchholz, who also serves as Associate Director of the Center for Biodiversity & Conservation Research. The peer-reviewed, scientific publication “Impact of Human Disturbance on the Thermoregulatory Behaviour of the Endangered Ringed Sawback Turtle (Graptemys oculifera)” also provides management recommendations for minimizing boater disturbance of basking turtles, and is freely available to be read online.