The popular national show Science Friday highlighted the research of Richard Buchholz, associate professor of biology at the University of Mississippi, for clues as to what a female turkey finds “hot” in a male on its radio show on November 21, 2014.

Darwin was the first to suggest that sexual selection (that is, mate choice and competition for mates) could be a selective pressure shaping the evolution of populations. At the time his Victorian colleagues scorned the idea that female animals could be “smart” enough to be choosy about their mates. Over the past three decades or so a resurgence of empirical interest in sexual selection has demonstrated the widespread influence of sexual selection on the behavior and morphology of animals and plants.

My current studies of sexual selection in the Wild Turkey build on my previously published work.

The wild turkey (Meleagris gallopavo) is a highly polygynous, sexually-dimorphic species, well suited to testing the intraspecific predictions and assumptions of ‘good genes’ models of female choice. Previously I tested alternative hypotheses for the maintenance of ‘fleshy’ ornamentation in males of this species. In addition to uncovering a non-sexual function for the brightly colored, bare head of the male wild turkey (which is crucial for maintaining sublethal body temperatures under warm ambient conditions and during physical exertion), my work also demonstrated that one aspect of male head ornamentation, the frontal process, or snood is subject to both intersexual and intrasexual selection. Captive female wild turkeys prefer to mate with long snooded males, and during one-on-one interactions, a male turkey is subordinate to males with relatively longer snoods. These results were demonstrated using both live males and controlled artificial models of males. 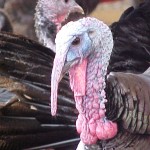 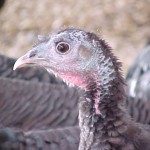 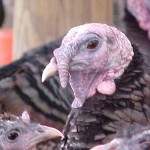 Why should turkeys pay such close attention to the length of a male’s snood? Data on the parasite burdens of free-living wild turkeys revealed a negative correlation between snood length and infection with intestinal coccidian (Eimeria spp.) a deleterious protozoan parasite. That is, in the wild the long snooded males preferred by females and avoided by males seemed to be resistant to coccidia infection. I have suggested that this is a case of female choice for male ‘good genes’. Females may be choosing coccidia-resistant males as mates so that their own offspring will inherit resistance genes and be more likely to survive. Indeed my colleagues and I have demonstrated that male snood-length is correlated with MHC genotypes associated with the immune response. These disease-resistance genes would be inherited by the preferred male’s chicks, presumably improving chick survival. I also hypothesized that coccidia-free males were probably more dominant than infected males. If so, selection should favor males who can assess the quality of their competitors before fighting, and thus avoid wasting energy in fights that they are likely to lose.

Subsequent research demonstrated that experimental infection of males when they are young results in them growing shorter snoods. Infection also produces feathers that are duller in the reflectance of ultraviolet light. The physiological mechanism by which these parasites limit ornament growth remains unclear, however. Lastly experimental infection also has an effect on female turkeys; they become choosier about their mates!

My current research in wild turkey mate choice focuses on the following questions:

a. How does variation in a wild turkey hen’s immunological exposure to parasite antigens affect her mating behavior?

b. Which metrics of mate sampling are indicative of general preferences and which are associated with individual preferences?

c. How does the risk of overheating during courtship limit a male’s ability to acquire mates?